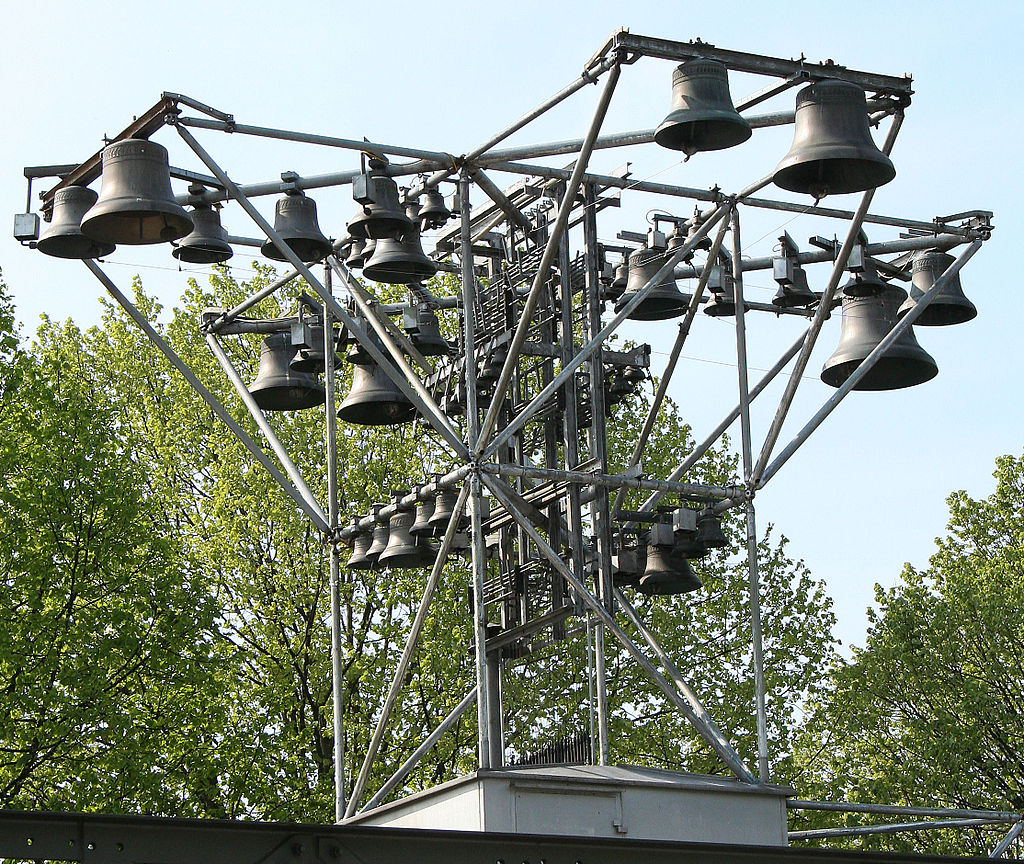 The carillon is a percussion instrument that consists of about twenty-three to seventy cup-shaped bells. Its name originated from the French word ‘quadrillon,’ which means, ‘four bells.’ In Germany, the carillon is called the Glockenspiel. These bells were housed inside a bell tower, church, or municipal building. Also, the carillon bells were played in a serial manner in order to produce a melody or a chord. Traditionally, the carillon was played manually by striking the stick-like keys of the keyboard. However, some carillons were played using a pedal keyboard. Both types of carillon were mechanically operated using levers and wires that are connected to metal clappers which strike the carillon’s bells.

Moreover, real carillons were fitted to theatre organs, instead of the metal chimes or bars that are more often used in simulations like at the Christie organ at the Odeon Marble Arch in London. Interestingly, the largest carillon in the world has about 120 bells, located in the Palace of Mafra in Portugal. Additionally, the carillon is deemed as the second heaviest of all the musical instruments, behind the largest pipe organs. The recorded second heaviest carillon is at the Riverside Church in New York City. It weighs about 100 tons, while the largest pipe organ, as well as the heaviest, weighs 287 tons.

Historically, the carillon is a set of swinging bells that plays melodic musical compositions in the Low Countries during the 16th century. The first carillon that was invented was in Flanders, northern Belgium. It was when a court jester played music using the bells and a baton keyboard in the Town Hall of Oudenaarde, Belgium in 1510. Subsequently, in the 17th century, notable figures in the evolution of the modern carillon have emerged. Some of them were Pieter Hemony and Francois Hemony, known as the greatest carillon bell founders of Low Countries. In collaboration with a Dutch nobleman, Jacob van Eyck, the two developed the carillon into a full-fledged and tuned musical instrument in 1644. It was then installed in Wijnhuistoren tower in Zutphen, Netherlands. Later on, as the years progressed, instruments that were built before the year 1940 with about fifteen to twenty-two bells are designated as historical carillons. The World Carillon Federations (WCF) had also defined this instrument as a musical instrument that is composed of tuned bronze bells played from a baton keyboard. On the other hand, the Guild of Carillonneurs in North America (GCNA) had defined the carillon as an instrument that consists of two octaves carillon bells that were arranged in a chromatic series. They also specify that the carillon is played from a keyboard, permitting the control of expression through a variety of touches. As well as that, a carillon bell is a cup-shaped bronze bell that has a close relationship with each other. Furthermore, according to the GNCA, the traditional carillons are the carillon that was played from a mechanical carillon keyboard. In contrast to that, the non-traditional carillon were the ones that are played by automated mechanical or electro-mechanical means.

Because of its bizarre music, there were also schools that teach how to play the carillon. Some of these schools were the first international carillon school, the Royal Carillon School in Mechelen, Belgium. Other carillon schools include the Netherlands Carillon School in Amersfoort. In addition, there were also several musicians that are known to play and compose music for the carillon. Some notable carillon composers were the Canadian carillonneur, Emilien Allard, and an American composer, Samuel Osmond Barber. Ulla Laage, Nora Johnston, Gordon Slater, Wendell Westcott, and Julianne Vanden Wyngaard were also known for playing the carillon musical instrument.