The handpan is a percussion instrument that is played with the hands. The name handpan is debated by other musicians since they thought that the term hang is much appropriated to call this instrument. But, the original makers argue that the name of this instrument should be Hang, for their brand of handpan. Although the term ‘hang’ is most commonly used verbally, some also prefer to call it handpans.

These convex steel drums are tuned with several notes such as major, harmonic minor, natural minor, Hijaz, or mi Mixolydian. Also, the handpans are overtone-emitting instruments that are able to create many layers of sounds, as well as ethereal effects. Interestingly, these drums work very well together with drone instruments like the Appalachian Dulcimer,  five-stringed banjo, a triple clarinet, and others.

This musical instrument was invented in 2001 by a little company located in Switzerland. However, the history of steel drums has long been present since the 1970s. In fact, Trinidad steel drums were immensely popular throughout Europe. One of those performers who has been playing the steel drum for almost twenty years was Felix Rohner. In the 1990s, Rohner founded his company and named it PanArt, and created his own concave instruments. Shortly afterward, Sabrina Scharer became his business partner.

Subsequently, a Swiss jazz musician named Reto Weber traveled to India and approached Rohner and Scharer’s business. Back then, Weber was looking for a steel drum that he could play using his hand, much like how he played the ghatam clay drum. With that, the inspiration for the Hang was born. Rohner and Scharer made up their own instrument as inspired by the Trinidad steel drum and flipped a custom hammered-metal pan from a concave to a convex position. Each of the seven or eight notes of the handpan was made sensitive to the lightest touch, which allows musicians to play this instrument by hand. 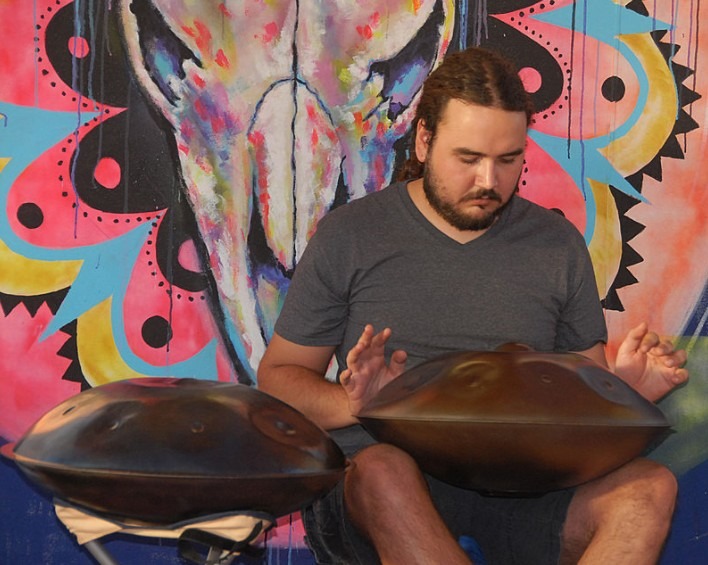 The center notes of the handpan, also referred to as the ding, protrude out from the middle. Meanwhile, the other musical notes around the ding are sunken into the metal, as one would see in the traditional Trinidad steel pan. However, the handpan has an extra dimple in the center of the note. Moreover, this convex pan was sealed together with an adhesive resonating chamber of thicker steel. This chamber has an opening in the middle, which is called ‘gu,’ that can be played percussively when the handpan is flipped upside down. Because of its shape, the handpan may look shaped like a mysterious UFO.

The maker of this instrument called their invention ‘the Hang,’ which means ‘hand’ in their Swiss-German dialect. In 2001, the two took the legal rights of the instrument over the name ‘hang’ under their company, PanArt. The instrument they have created instantly became notable because of its mysterious yet beautiful, unique scales and tone. Although many desire to own the instrument, Sabrina and Felix approached it as a work of art and not as a commodity. With that, they refused to mass-produce their product. They only make a limited number each year by hand.

In addition, the two also introduced a policy of making a hand-written letter as to why they want to purchase the instrument at their store. Those that do not have a letter and simply visited the store without an invitation were sent home. Consequently, in 2007, makers in the United States and Europe created their own version of the Hang. But because of some legal issues, they cannot use the name ‘hang.’ Thus, the term ‘handpan’ was used and is now referred to any type of hang type steel pan that is created by other manufacturers. Furthermore, because of the few handpan makers in the world, these instruments were difficult to obtain. These are also expensive compared to other available instruments. Due to its complexity, the top line makers usually have a long waiting list of orders that are pushed back for years. In 2013, the company stopped producing the instrument. According to Felix, the Hang is not something that could be put in a shop window. He also stated that it belongs to the flow of the gift.